Most of us have heard of pepper spray. It is used by military and police forces to subdue dangerous criminals in a non-lethal way. Popular shows, such as “Cops” and “CSI” have shown or portrayed pepper spray being used to stop attackers. Some of these attackers are under the influence of very dangerous drugs, such as methamphetamines, hallucinogenics, and extremely high amounts of alcohol and unknown mixtures of any number of drugs. These drugs can make users stronger, less susceptible to pain and more volatile. So, how is it that one substance, such as pepper spray, can stop them all? Why is it so effective?

The Science Behind the Spray

Pepper spray is a derivative of cayenne pepper, more specifically, various parts of the cayenne pepper plant. When this derivative is sprayed on an assailant, it invades the lungs, eyes and sinuses. Once there, it causes burning and swelling, incapacitating the would-be assailant. A person that has been sprayed with pepper spray cannot fight back because he or she cannot breathe. The inability to breath stops the attacker, regardless of the drug or drugs he or she may be on.

The active ingredient in pepper spray is capsaicin. It is the same ingredient that gives cayenne and other peppers their sting. However, with pepper spray, the capsaicin is extremely concentrated, resulting in what is known as a substance called oleoresin capsicum. Once introduced to the respiratory system, oleoresin capsicum has the ability to render any individual helpless.

The real estate market is booming, in part thanks to the oil field workers. Realtors are having problems finding houses to sell and sellers are benefiting from the bidding wars on multiple offers.

And while the multiple offers sound good, it’s not all good for realtors. Recently, in New York, a homeless man robbed a real estate agent at knife point as she showed him an empty house. According to USA Today, 2 real estate agents were killed as they were showing a house and another robbed.

Real Estate Agents need to show houses, but they need to stay safe as well! UDAP has an electric stun gun with a flashlight to help. The agent can carry the stun gun in his/her hand while showing a house, using it as a flashlight and it’s ready to go if needed. Keep yourself safe. For more information, you can view our entire selection at UDAP.com!

Smartphone thefts rose again in 2013 despite efforts to stop them.  According to the Huffington Post, it has become an epidemic of violent street crimes. Police Departments nation wide have stepped up efforts to educate the public on Smartphone theft safety to prevent being a victim of robbery.

There is currently a nationwide effort to encourage Smartphone makers to create a “kill switch” that will render the phone useless if stolen. Some companies are implementing kill switches and while others are looking at it, Smartphone users need to become more aware of their surroundings. Watch the people around them, whether sitting in a restaurant or walking down the street.

UDAP Pepper Power has two products that can assist you in staying safe. UDAP self defense pepper spray!

Pepper sprays for your key chain and the like do not work on bears. The minimum size of for bear pepper spray is 7.9 ounces or 225 grams. Each bear deterrent will contain an EPA registration and establishment number, date code and the words “bear deterrent,” “bear spray,” “bear pepper spray,” “bear mace” or “bear repellant.” Bear repellant is not a very suitable word for this product and only one manufacturer uses it. The word repellent can confuse the user in to thinking that they can spray themselves or equipment like you do a bug repellent spray.

This is NOT true nor is it the proper way to use bear deterrent. You need to actually spray low in front of the charging bear, for it to be used correctly.

This creates a protective barrier between you and the animal. In 1999, the EPA wanted to specifically label bear spray as a repellant. However, this misleads the public and the vendors into thinking that this product was to be applied to themselves and the site or equipment just like bug repellant spray. Mark Matheny worked diligently to change the word from repellant to deterrent and to stop the misuse of the product and to explain further the proper use of the spray for deterring a potential bear attack. Even though the words deterrent and repellant have the same meaning, repellant is used in relation to insect spray so commonly that deterrent is a much better fit.

How many real estate agents have been placed in danger, because of the nature of their job? While I am not a realtor, there have been a few times in my life, and I suspect in yours as well, that something has happened where your life was placed in danger but you managed to avoid a catastrophe by sheer luck.  Either you realized what was about to happen and changed course or someone came to your rescue. These are the “near-misses” in our lives that we all experience from time-to-time, situations that we seldom hear about but situations that we could learn a lot from if we were made aware of the details.  Sometimes someone else causes the incident that leads to a “near miss” and there’s probably little that we can do about that except to be as observant as we can and then react quickly enough to avoid a problem.

For example, a real estate agent showing a prospective client a house after dark and he/she is robbed. Wouldn’t a stun gun or pepper spray come in handy? UDAP Stun Guns can double as a flashlight, so you have it ready in your handy and you can use it to show clients those dark crawl spaces or under sinks. Make that would be robber think twice. Don’t depend on luck to keep you safe, be prepared whether it’s carrying UDAP Pepper Spray or a UDAP Stun Gun, detect the precursors of life endangering situations and avoid them! Always be prepared for those dangerous situations. 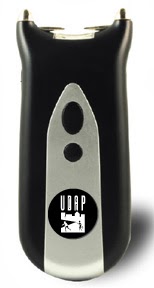 It’s summer time and most of us are enjoying the great outdoors! Camping, fishing, hiking, biking and many other outdoor activities. But I want to encourage you, while you are having fun outside, don’t forget to remember outdoor safety!

There are lots of bugs, so don’t forget the bug spray. Don’t forget your UDAP Bear Spray-it works on more than just bears! If you run into a moose who charges, a mountain lion that wants to attack, a charging buffalo or any animal who is going to attack-you can use UDAP Bear Spray to protect yourself and your family!
Enjoy the great outdoors this summer with your family! And don’t forget to bathe/shower and check yourself and family members for ticks when you get home.

A customer recently wanted to know if it was permissible to take his bear spray in his carry on bag when he was flying on vacation. He was going camping/fishing and wanted to make sure that he had his bear spray with him.  So we went straight to TSA.gov to find answers and here was the site had to say:

Mace and self-defense sprays are prohibited from carry-on baggage.

In your checked baggage, you are permitted to have one 118 milliliter or 4 fluid ounce container of mace or pepper spray with a maximum concentration of 2% active ingredient provided that the container is equipped with a safety mechanism to prevent accidental discharge. Note: Most animal repellants exceed these volume and concentration limitations.

Even if an item is generally permitted, it may be subject to additional screening or not allowed through the checkpoint if it triggers an alarm during the screening process, appears to have been tampered with, or poses other security concerns. The final decision rests with TSA on whether to allow any items on the plane.

If you are planning a vacation this summer that includes camping, fishing, hiking or other outdoor activities that include flying to your destination and want to take your Bear Spray or Pepper Spray, you can always check with the hotel that you’re staying mail your bear spray ahead of time so that it’s there waiting for you when you arrive. Another idea is to check to see if UDAP Pepper Spray is sold in the area where you will be taking your vacation.

If you have a question, tip or a review of our products, please let us know and we will do our best to answer it here.

Just a quick friendly note to let you know that Mark Matheny of UDAP will be feature as one of the bear attack survivors in tonight’s episode of Expedition Wild, on the National Geographic Wild channel.
Monday October 11th at 7:00pm MT time

UDAP Industries will post updates for testimonials, new product, news on bears and bear safety, and other related information. We welcome all to follow us and post your comments. Please do not use harsh words as your post will be deleted.

We hope that this website and Pepper Power will be instrumental in helping to safeguard your life. We at PepperPower.com believe that Your Life is as important to others as it is to yourself. From “first hand” experience, we realize how quickly life can be taken away. We hope you become familiar with using our products and also the information in this website. It is our heartfelt desire, to not only help you understand the products, but to also help you learn how to avoid and actually stop an attack. Please take to heart the information in this website. By reading and practicing the techniques mentioned in this website, you can further prepare yourself for the unexpected.