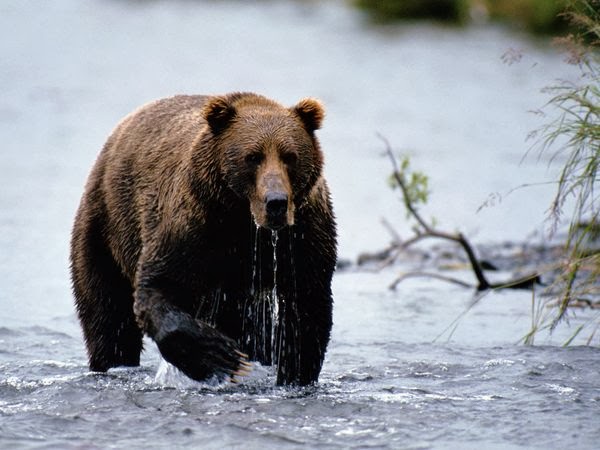 Brown bears can be found in forests and woodlands, sub alpine mountain areas, scrub, shrub and brushlands, lakes, ponds, rivers & streams to name a few. and across the tundra region. They can be found in Rocky Mountains, Southwest, Northwest, Western Canada, and Alaska.

In some areas their appearance and color depends on their habitat, diet and season. And did you know that the Grizzly Bear that lives in the contiguous U.S. is on the U.S. Endangered Species List. It is classified as threatened in the lower 48 states, although its current range extends only into Idaho, Montana, Washington (rarely), and Wyoming. (It has not been recorded in Colorado in many years.) It is said that
50,000 Grizzlies roamed the western U.S. in 1800 from the Canadian border to Mexico, as far east as the middle of the Great Plains. However, the settlement and development of the West meant changes to and destruction of the Grizzly’s habitat, competition with humans for game such as White-tailed Deer, and clashes between bears and humans.

For many, grizzlies have always been seen as a threat to humans and livestock, and were hunted, trapped, and poisoned extensively, both for food and fur and to eliminate them from areas where humans lived. In 1975, when the Grizzly Bear came under the protection of the U.S. Endangered Species Act, only about 1,000 remained in the lower 48 states.

Warning All North American bears can be dangerous in the following situations:

If you are camping, you must firmly seal up food and place it out of reach. Bears will break into unattended vehicles if they smell food. The Grizzly is the most dangerous of all bears. Do not feed, approach, surprise at close range, or get between a Grizzly Bear and its food or cubs. While Grizzlies normally avoid humans, they will attack and have been known to seriously injure and even kill humans. Grizzlies can outrun
humans, and can climb trees. If charged by a Grizzly, stand your ground; if attacked, lie flat on your stomach and play dead.

To get your UDAP Bear Spray, please visit us online today!